In the previous blog posts in this series on consumer-driven contract testing and Pact, we were introduced to CDCT, saw how to use Pact to support CDCT, how to automate the process and make it part of a CI/CD pipeline, and saw what happened when expectations change on the consumer side.

In this sixth and final post, we are going to see how to add a new service to the CDCT process, and how an approach called bi-directional contract testing can make that much easier.

Disclaimer: Bi-drectional contract testing is a feature that is exclusive to Pactflow and is not available in the OSS Pact Broker.

To ensure a smooth and seamless order completion service, our sandwich shop has decided to enable customer to make payments for their orders online through a third party payment provider. This payment service is consumed by the order service we have already seen in the previous blog posts, meaning that our architecture now looks like this: 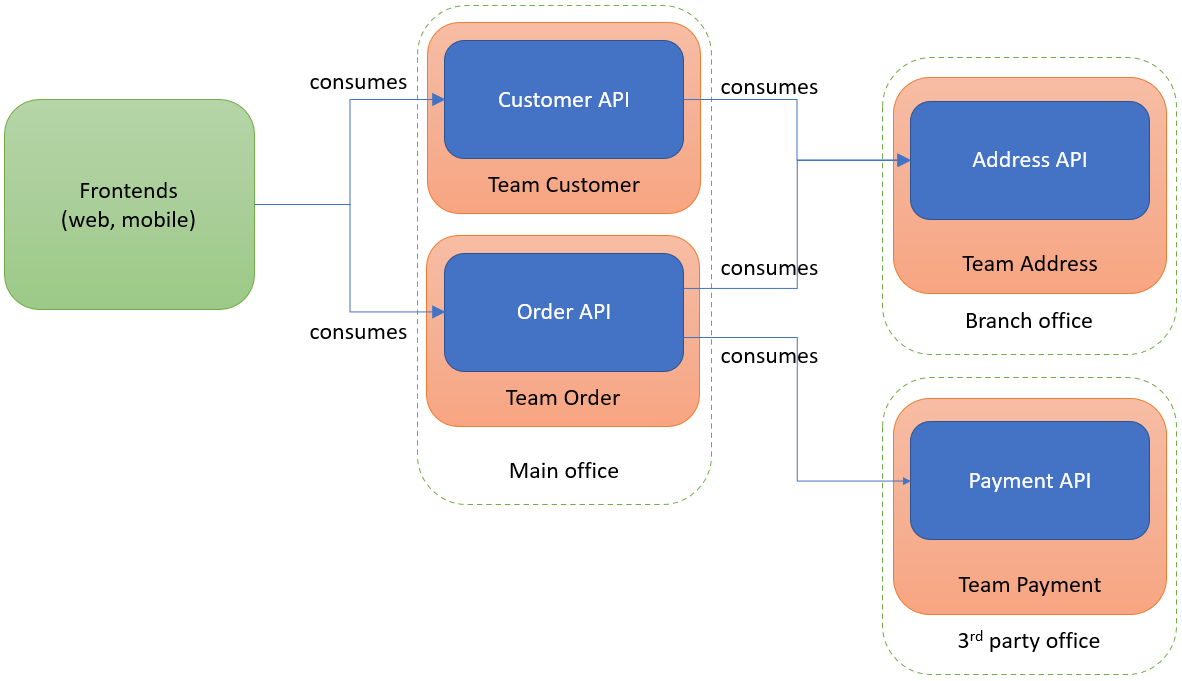 However, the team responsible for developing and delivering the payment service is not keen to adopt Pact, as they feel it would be too intrusive to their current development and testing approach.

According to the team behind Pactflow, this is actually a common drawback for a lot of teams thinking about adopting CDCT: implementing Pact in the way we have seen in the previous articles requires significant effort on both the consumer and the provider end.

Bi-directional contract testing, or BDCT, uses a different flow: in BDCT, both the consumer and the provider generate their own version of a contract, which they both upload to Pactflow, which then compares the two contracts for compatibility.

Once that is done, both the consumer and the provider can then use can-i-deploy again before they deploy to production to see if there aren’t any potential integration issues.

And to make it easier to generate contracts, BDCT does not require a ‘full’ implementation of Pact. Instead, you can leverage existing tests, tools and specifications and upgrade them into a contract testing solution.

The Pact documentation does a great job of explaining all the nuts and bolts, as well as listing all supported tools and technologies, so I’m not going to repeat all the details here. Instead, let’s look at an example.

The consumer side - generating a contract from WireMock mocks

To test the payment process for sandwich orders, the order service team already uses WireMock to mock out the payment service provider. Since WireMock is one of the tools that is already supported by the Pactflow team for BDCT purposes, the behaviour that is mocked with WireMock can be used to generate a contract on the consumer side.

In this example, we’ll look at HTTP GET operations that retrieve payment details for a specific order ID. The process is the same for other operations (e.g., POST for submitting a payment for an order).

This is what the test looks like for a successful retrieval of payment details:

To generate a BDCT consumer contract from these tests and mocks, the Pactflow team has provided the wiremock-pact-generator library. After adding this as a dependency to the project, the only thing we need to change in our test code is adding the WireMockPactGenerator as a listener to the WireMock instance:

As you can see, when adding the WireMockPactGenerator, the only thing we need to supply is an identification for the consumer (order_consumer) and the provider (payment_provider) and we’re good to go.

When we run the tests that invoke the WireMock instance with the Pact listener, a contract is generated and placed in the /target/pacts folder, just as we’ve seen in ‘traditional’ CDCT. The contract does look a little different, though, especially where it specifies the expectations around the response body in case of a successful retrieval of payment details:

As you can see, the contract does not explicitly specify that response body elements returned by the provider should match the examples given in the contract only on type (for example), where this is the case in ‘traditional’ CDCT contracts.

In BDCT, as explained before, the verification is done by Pactflow, not by the provider (as they upload their own contract), and schema-based verification (i.e., verification on data type or shape) is the only type of verification that is performed.

This has a couple of interesting benefits (note that these are a direct quote from an email from Matt and the extremely helpful Pactflow team):

Once the contract is generated from the WireMock-based tests on the consumer side, they can be uploaded in the same way as a ‘traditional’ contract:

When we take a look at Pactflow, we can see that a new integration between the order_consumer and the payment_provider has been added, and that it is as of yet unverified:

That is it from the consumer end. Let’s now move to the provider side!

The provider side - using an existing OAS as a contract

With BDCT now being an option for fast implementation of contract tests, providers can reuse existing service specifications as their contract for verification by Pactflow. Currently, only OpenAPI specifications (OAS) are supported, but as this is a very common specification standard, a lot of providers may already benefit from this option.

It is good to note that the provider will likely already have tests that verify that the provider endpoints fulfill the expectations in the API specification (the OAS). These test results can be uploaded together with the OAS as additional proof.

Typically, a provider CI pipeline will execute these functional tests before publishing the contract / the OAS, which means that failing tests will lead to no contract being published to Pactflow.

At the moment of writing this, uploading of the OAS to Pactflow has to be done using a somewhat arcane API call, but the Pactflow team is working on including this in the Pact CLI tools, which will undoubtedly make the process a lot easier.

Here’s the PUT call currently required to upload the provider contract (as you can see, I used Postman, but cUrl or any other API client should work, too):

If all went well, the response status code is HTTP 201, which indicates that the provider contract was successfully uploaded to Pactflow. When we refresh the screen, we can see that not only did Pactflow receive the contract, it also compared the consumer and the provider contract for us:

As you can see from this example, BDCT is a very powerful way of starting with contract testing. Because BDCT leverages existing tools and specifications, not a lot is needed to get your first contracts uploaded and verified, compared to traditional ‘full-blown’ CDCT. As more tools and specification standards will start to see support from Pact, BDCT will likely increase in popularity.

As usual, the only sensible answer here is ‘it depends’. I’ll leave you with this comparison, written by the Pactflow team itself.

This concludes the blog post series on CDCT and Pact. I’m pretty sure I’ll keep diving in and learning more about CDCT, BDCT and Pact in the future, so there might be more blog posts on specific topics in this area coming up, but these six articles should give you a good introduction into the concepts of consumer-driven contract testing, bi-directional contract testing and the tooling that supports these approaches.

And as always, if you have any questions or remarks, leave a comment here or contact me directly.

All code you’ve seen in this blog post can be found on GitHub.