Recently, I’ve delivered my first ever three day ‘Python for testers’ training course. One of the topics that was covered in this course is writing tests for RESTful APIs using the Python requests library and the pytest unit testing framework.

In this short series of blog posts, I want to explore the Python requests library and how it can be used for writing tests for RESTful APIs. This first blog post is all about getting started and writing our first tests against a sample REST API.

Getting started
To get started, first we need a recent installation of the Python interpreter, which can be downloaded here. We then need to create a new project in our IDE (I use PyCharm, but any decent IDE works) and install the requests library. The easiest way to do this is using pip, the Python package manager:

Don’t forget to create and activate a virtual environment if you prefer that setup. We’ll also need a unit testing framework to provide us with a test runner, an assertion library and some basic reporting functionality. I prefer pytest, but requests works equally well with other Python unit testing frameworks.

Then, all we need to do to get started is to create a new Python file and import the requests library using

Our API under test
For the examples in this blog post, I’ll be using the Zippopotam.us REST API. This API takes a country code and a zip code and returns location data associated with that country and zip code. For example, a GET request to http://api.zippopotam.us/us/90210

A first test using requests and pytest
As a first test, let’s use the requests library to invoke the API endpoint above and write an assertion that checks that the HTTP status code equals 200:

What’s happening here? In the first line of the test, we call the get() method in the requests library to perform an HTTP GET call to the specified endpoint, and we store the entire response in a variable called response. We then extract the status_code property from the response object and write an assertion, using the pytest assert keyword, that checks that the status code is equal to 200, as expected.

That’s all there is to a first, and admittedly very basic, test against our API. Let’s run this test and see what happens. I prefer to do this from the command line, because that’s also how we will run the tests once they’re part of an automated build pipeline. We can do so by calling pytest and telling it where to look for test files. Using the sample project referenced at the end of this blog post, and assuming we’re in the project root folder, calling

results in the following console output:

It looks like our test is passing. Since I never trust a test I haven’t seen fail (and neither should you), let’s change the expected HTTP status code from 200 to 201 and see what happens: 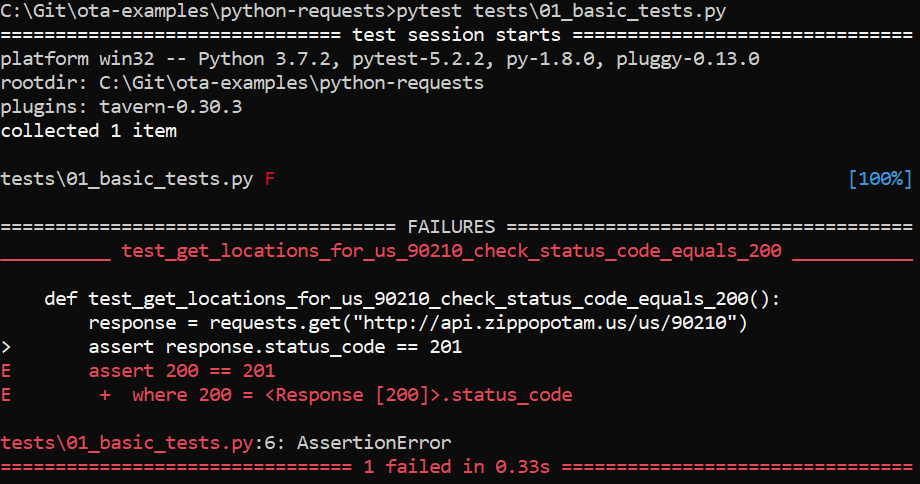 That makes our test fail, as you can see. It looks like we’re good to go with this one.

Extending our test suite
Typically, we’ll be interested in things other than the response HTTP status code, too. For example, let’s check if the value of the response content type header correctly identifies that the response body is in JSON format:

In the response object, the headers are available as a dictionary (a list of key-value pairs) headers, which makes extracting the value for a specific header a matter of supplying the right key (the header name) to obtain its value. We can then assert on its value using a pytest assertion and the expected value of application/json.

The requests library comes with a built-in JSON decoder, which we can use to extract the response body from the response object and turn it into a proper JSON object. It is invoked using the json() method, which will raise a ValueError if there is no response body at all, as well as when the response is not valid JSON.

When we have decoded the response body into a JSON object, we can access elements in the body by referring to their name, in this case country.

To extract and assert on the value of the place name for the first place in the list of places, for example, we can do something similar:

As a final example, let’s check that the list of places returned by the API contains exactly one entry:

This, too, is straightforward after we’ve converted the response body to JSON. The len() method that is built into Python returns the length of a list, in this case the list of items that is the value of the places element in the JSON document returned by the API.

Using the examples for yourself
The code examples I have used in this blog post can be found on my GitHub page. If you download the project and (given you have installed Python properly) run

from the root of the python-requests project to install the required libraries, you should be able to run the tests for yourself. See you next time!