Many of you probably have not noticed, but last weekend I deactivated my Twitter account. Here’s why. 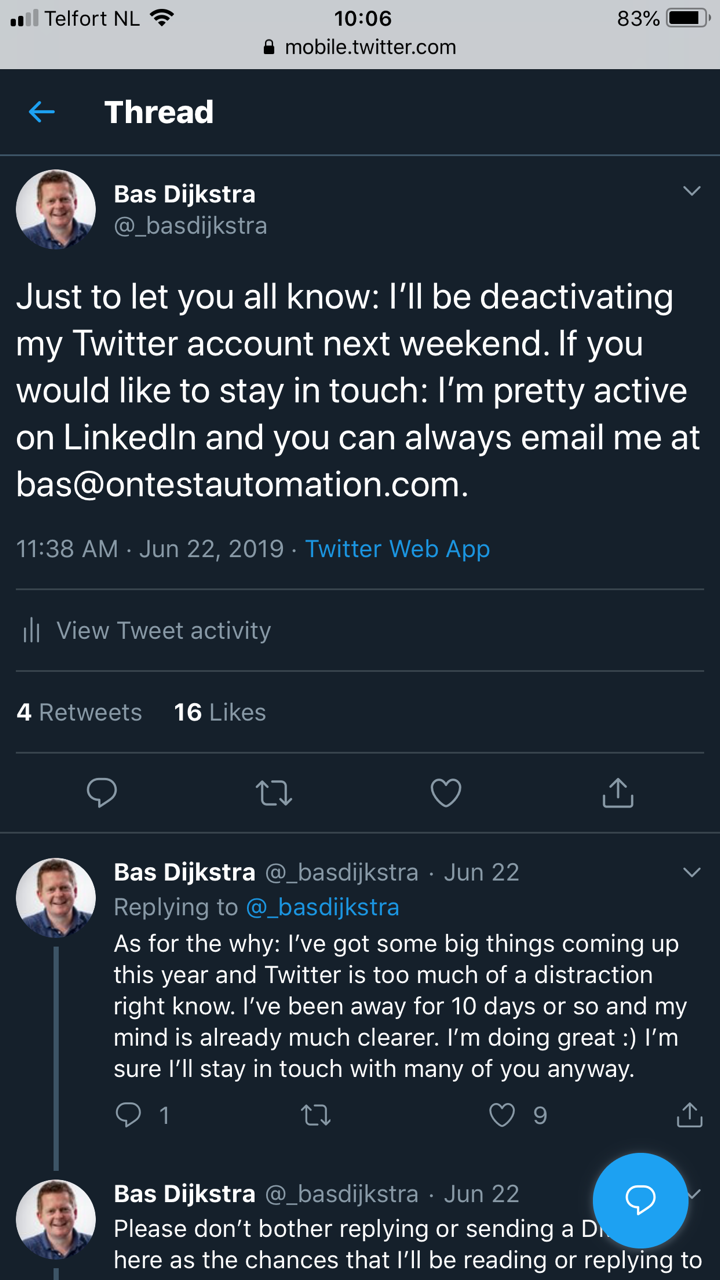 I’ve been active on Twitter for around four years. In that time, it has proven to be a valuable tool for keeping up with industry trends, staying in touch with people I know from conferences or other events, as well as a few non-testing and IT related sources of information (mainly related to running or music).

Over time, though, the value I got from Twitter was slowly getting undone by two things in particular:

I started to notice that because of these two reasons, I became ever more restless, distracted and downright anxious, and while Twitter may not have been the only reason for that, it was definitely a large contributor.

I couldn’t write, code or create courseware for more than 10 minutes without checking my feed. My brain was often too fried in the evening to undertake anything apart from mindless TV watching, playing the odd mobile game or even more social media consumption. Not a state I want to be in, and definitely not an example I want to set for my children.

So, at first, I decided to take a Twitter break. I removed the app from my phone, I blocked access to the site on my laptop and activated Screen Time on my phone to make accessing the mobile Twitter site more of a hassle. And it worked. Up to a point.

My mind became more clear, I became less anxious. But it still felt like it wasn’t enough. There was still the anxiety, and I still kept taking the extra steps needed to check my Twitter feed on my phone. And that’s when I thought long and hard about what value I was getting from being on Twitter in the first place. After a while, I came to the realization that it simply was too little to warrant the restlessness, and that the only reasonable thing to do was to pull the plug on my account.

So that’s what I did. And it feels great.

I’m sure I’ll still stay in touch with most people in the field. Business-wise, LinkedIn was and is a much more important source of leads and gigs anyway. There are myriad other ways to keep in touch with new developments in test automation (blogs, podcasts, …). And yes, I may hear about some things a little later than I would have through Twitter. And I even may not hear about some of them altogether. But still, leaving Twitter so far turns out to be a major net positive.

I’ve got some big projects coming up in the next year or so, and I’m sure I’ll be able to do more and better work without the constant distraction and anxiety that Twitter gave me in recent times.

So, what’s up in the future? Lots! First of all, more training: this month is my first ever month when I hit my revenue target purely through in company training, and I hope there are many more to come. I’ve got a couple of conference gigs coming up as well, most notably at this point my keynote and workshop at the Agile & Automation Days in Gdańsk, Poland, as well as a couple of local speaking and workshop gigs. And I’m negotiating another big project as well, one that I hope to share more information about in a couple of months time.

Oh, and since I’m not getting any younger, I’ve set myself a mildly ambitious running-related goal as well, and I’m sure that the added headspace will contribute to me keeping focused and determined to achieve it. I’ll gladly take not being able to brag about it on Twitter in case I make it.

One immediate benefit of me not being on Twitter anymore is the fact that I seem to be able to read more. Just yesterday, I finished ‘Digital Minimalism’ by Cal Newport, and while this book hasn’t been the reason for my account deactivation, it surely was the right read at the right moment!