On the 2018 Romanian Testing Conference

So, last week I had the pleasure of attending the 2018 edition of the Romanian Testing Conference. It was my second visit to Cluj: after having delivered a workshop at the conference last year I was invited to do another workshop for this year’s edition. I told Andrei, one of the organizers, that I would gladly accept if he:

During the time when the CFP was open, I sneakily submitted a proposal for a talk as well, and was quite surprised to see it accepted too. Yay! More work!

I left for Romania on Wednesday and arrived around 7 PM at the hotel Grand Italia, which again was both the place where the speakers had their rooms as well as the venue for the conference itself. I cannot stress how awesome it is to be able to pop in and out of your room before, during and after workshops and talks without having to go to another place. Need a rest? Go to your room. Forgot something? You’ll have retrieved it in minutes. Want to check if there’s anyone up for a chat and/or a drink? Just ride the elevator down.

Again, the organization went to great lengths to make us speakers and workshops hosts as comfortable as they could. Always someone around if you have questions, picking you up from and bringing you back to the airport in dedicated RTC cars (even at stupid o’clock), it is a wonderfully organized event.

Like last year, I hosted a workshop around API testing and automation. Where I only used REST Assured last year, I decided to give the participants a broader overview of tools by including some exercises with SoapUI, as well as a demo of Parasoft SOAtest, a commercially licensed API testing tool. Also, compared to last year, I threw in more background on the ‘why?’ and the ‘what?’ of API testing. 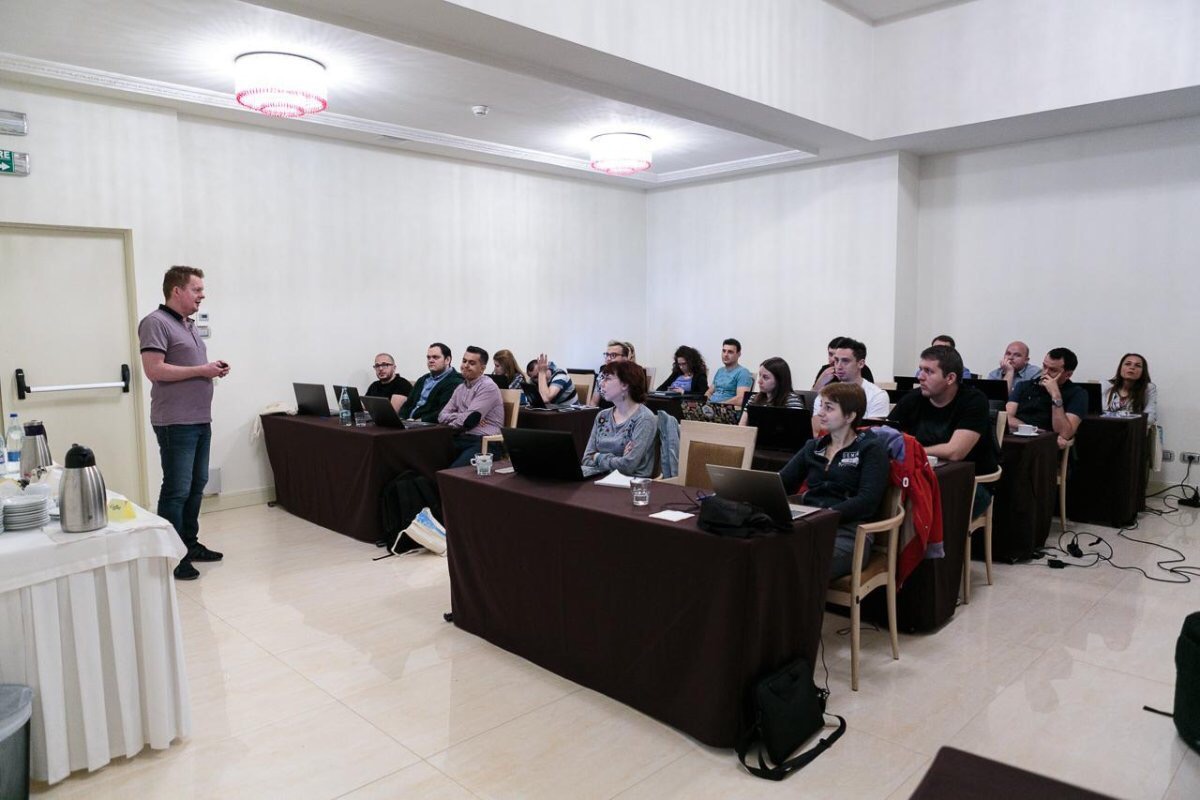 I had 30 participants (like all other workshops and the conference itself, it was sold out) and after a bumpy start, including a couple of power outages, we were off. Like with all workshops, it took me a little time to gauge the level of experience in the room and to adjust my pace accordingly, but I think I got it right pretty quickly. With several rounds of instructions > exercise > feedback, time was flying by! Breaks were plenty and before I knew it, the working part of the day was over.

We were invited to a wonderful speakers dinner in the hotel restaurant, which provided plenty of time and opportunity to catch up with those other speakers I met before, as well as to meet those that I hadn’t had the privilege to meet yet. After a day of teaching and all the impressions from dinner, I decided to be sensible and make it an early night. Mission failed, because once in my room it still took me hours to fall asleep. My brain just couldn’t shut off..

Friday morning came quickly and that meant conference day time! The programme was strong with this one.. So many good talks on the schedule. Yet, like with many conferences, I spent most of the day in the hallway track, preparing for my talk (I wasn’t on until 4 PM) as well as having a chat with speakers and attendees. For me, that’s often at least as valuable as the talks themselves.

Still, I saw three talks: first Angie Jones’ keynote (I met her a month earlier in Utrecht but had never seen her speak before), then Viktor Slavchev’s talk and finally Maria Kedemo’s keynote. All three were very good talks and I learned a lot from them, both in terms of the message they conveyed as well as their presentation style.

This day flew by too and before I knew it, it was time for my own talk. Now, I’m a decent workshop host (or so I’d like to think…) but I am not an experienced speaker, so doing a talk takes a lot out of me, both in terms of the time it takes to prepare as well as the energy I spend during the talk itself. Still, I was pretty pleased with how I did, and the feedback afterwards reflected that. Maybe I just need to do this more often.. 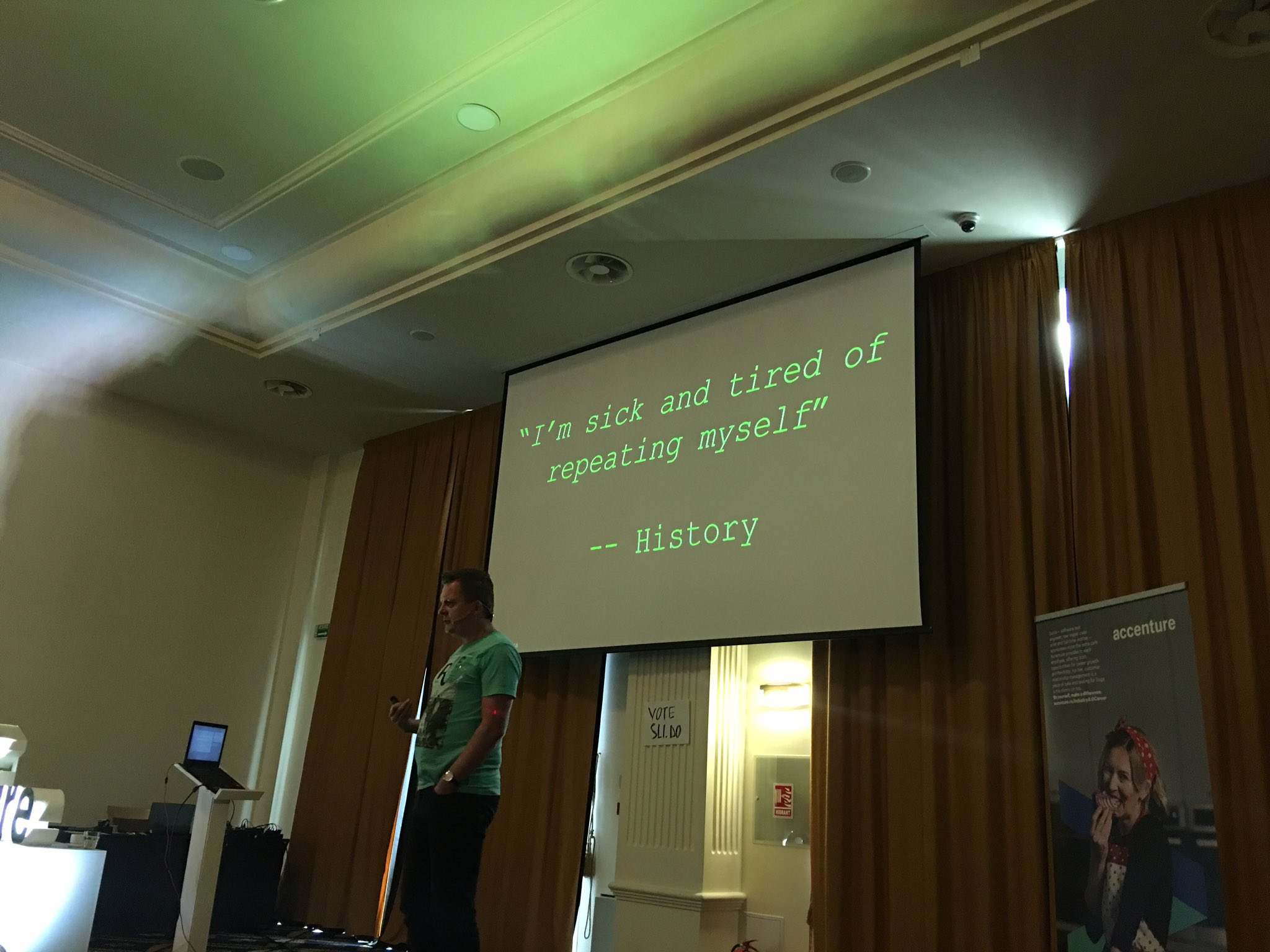 After the closing talk, which I skipped in favor of going outside, enjoying the beautiful weather and winding down, the conference was already over. To round it all off, we went out for a bite with some of the speakers before we attended the conference closing party. The organization had one final surprise in tow for me there when they gave me an award for the best workshop of the conference. Seeing the list of amazing workshops that they had on offer this year, I certainly did not expect that!

Since my flight back home left at an ungodly hour the next morning, I decided not to make it too long an evening (not everybody followed my example judging from my Twitter timeline the next morning..). Travels home were uneventful (which I consider a good thing) and suddenly, it was all over again.

So, did the organization deliver? Well, I did get to do my workshop on the Thursday, and I had an amazing time again, so yes, I’d say mission accomplished.

Who knows, we’ll be seeing each other there next year?